Learn about Ria Formosa, a protected area in the southernmost region of Portugal and a must-see during your holiday in Algarve

Located in the Algarve, Ria Formosa is a Nature Park since 1987.

The Ria Formosa Nature Park covers a huge variety of habitats organized in mosaics like sand-dunes, salt marshes, tidal flats, islets, salt pans, fresh water marshes and ponds, pine woods and agriculture fields. It is one of the most precious treasures of the Algarve’s ecosystem bursting with wildlife to discover. Reflecting its importance, Ria Formosa is also classified as a Wetland of International Importance (Ramsar Site) and as Special Protection Area, and is included in the Site of Community Importance Ria Formosa-Castro Marim (Natura 2000 Network).

The area is vital for birds, specially for waterfowl mainly because it’s a wintering ground for birds from northern and central Europe, particularly for several duck species and many waders. It’s also a stop-over point in the migration routes between Europe and Africa and it provides shelter for rare species in Portugal like the purple gallinule which was chosen as the symbol of the nature park.

The importance of this area is not limited to birdlife. The sand dunes and the salt marshes display a rich a unique vegetation specially adapted to these harsh environments. The lagoon is a nursery area for many species of fish that spend their early stages of development in the shallow waters of the lagoon.

Shellfish farming occupies more than 1000 ha and is responsible for nearly 80% of the Portuguese clam exports.

Classified as a Nature Reserve in the 70s, this protection status was elevated to a Natural Park in 1987 because of the increased need of regulation of tourism and urban pressure as well as due to the need of planning the surrounding territory.

This beautiful Nature Park is a must-see during your holiday in Algarve. 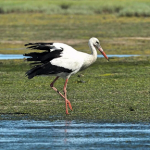 A Local’s Guide to the Best Things to Do in Faro Portugal
May 11, 2022admin

Why Take a Guided Kayak Tour in Ria Formosa
April 4, 2022admin
We use cookies on our website to give you the most relevant experience by remembering your preferences and repeat visits. By clicking “Accept All”, you consent to the use of ALL the cookies. However, you may visit "Cookie Settings" to provide a controlled consent.
Cookie SettingsAccept All
Manage consent

This website uses cookies to improve your experience while you navigate through the website. Out of these, the cookies that are categorized as necessary are stored on your browser as they are essential for the working of basic functionalities of the website. We also use third-party cookies that help us analyze and understand how you use this website. These cookies will be stored in your browser only with your consent. You also have the option to opt-out of these cookies. But opting out of some of these cookies may affect your browsing experience.
Necessary Always Enabled
Necessary cookies are absolutely essential for the website to function properly. These cookies ensure basic functionalities and security features of the website, anonymously.
Functional
Functional cookies help to perform certain functionalities like sharing the content of the website on social media platforms, collect feedbacks, and other third-party features.
Performance
Performance cookies are used to understand and analyze the key performance indexes of the website which helps in delivering a better user experience for the visitors.
Analytics
Analytical cookies are used to understand how visitors interact with the website. These cookies help provide information on metrics the number of visitors, bounce rate, traffic source, etc.
Advertisement
Advertisement cookies are used to provide visitors with relevant ads and marketing campaigns. These cookies track visitors across websites and collect information to provide customized ads.
Others
Other uncategorized cookies are those that are being analyzed and have not been classified into a category as yet.
SAVE & ACCEPT